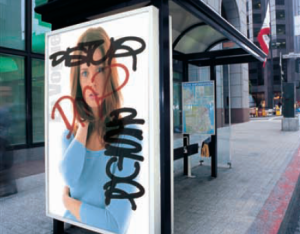 Thankfully, there is anti graffiti tinting. This film protects windows from graffiti in a rather unique way. Let’s take a moment to discuss what it is and how it works, exactly.

For starters, it doesn’t actually prevent vandals from marking windows with graffiti. However, it’s acts a protective film that makes it so the actual window (or marble or stainless steel) isn’t damaged. Pretty much any nonporous surface can be covered in this film in an effort to prevent vandals from damaging glass, mirrors, and other surfaces. This anti graffiti tinting doesn’t just protect against paint; it also protects against key scratches and acid etching. Once the film is damaged, it just needs to be removed. That’s it! The surface underneath is left untouched.

Next, a new layer of the protective film is put in place to prevent damage from a second attack. Meanwhile, your clients or customers will be none the wiser because there won’t even be the telltale signs of a graffiti cleanup effort with obviously fresh paint blotches everywhere. They won’t be able to tell at all, which means business can go on as usual and no one will be the wiser.

This anti graffiti tinting can also be used to protect overpasses. Can you imagine it? No more awful graffiti eyesores as you’re on your commute? From shopfronts to community areas to even private property, this film is an economical alternative to removing graffiti or painting over it. Just peel it off and be on with your day. It’s also a whole lot cheaper to replace this tinting than to cover it up.

It even protects against unintentional damage and scratches just from a surface being exposed to the public. What if a pebble gets kicked up by a car and nicks the window? This could have been a costly repair but anti graffiti tinting prevents the damage from even getting to the actual window. Your business aesthetic is preserved and you can let worrying about damage from vandalism slip to the back of your mind.